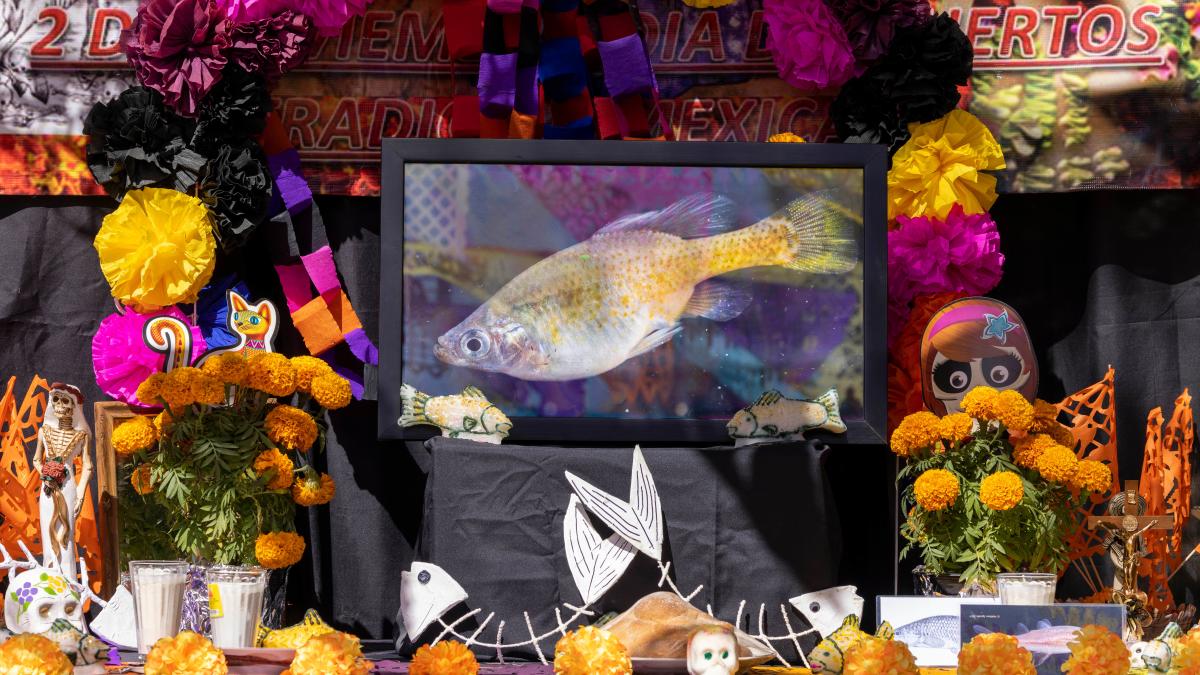 Leonardo DiCaprio has praised the work of Chester Zoo and its conservation partners for bringing a rare species of fish “back from the dead.”

Zoo conservationists teamed up with a team of global experts from the UK, North and Latin America to release 1,200 golden skiffia fish into Mexico’s Teuchitlan River for the first time in 30 years on Wednesday.

The Cheshire Zoo thanked the Hollywood actor after sharing the news of the successful reintroduction with his 55.6 million Instagram followers via social media.

The golden skiffia was in danger of extinction in the wild due to human disturbance caused by dam construction, water extraction, pollution and the introduction of invasive species.

DiCaprio’s post, which has garnered more than 282,000 likes, showed a photo of a gold skiffia surrounded by brightly colored flowers and colorful calaveras — the Mexican word for skulls — in reference to the Day of the Dead, which coincided with the fish’s release.

The Day of the Dead is a traditional Mexican celebration where people’s deceased ancestors are believed to return to the land of the living for one night to talk and spend time with their families.

Omar Dominguez-Dominguez, a professor and researcher at the Michoacan University of Mexico, led the reintroduction of the gold skiffia and said bringing the fish back on the prominent day was a “great thing.”

Mr Dominguez-Dominguez said: “The release of the golden skiffia at this time is a metaphor for how the species has returned from the dead to return to its home, not for one night, but forever.

“The release of this species into the wild is a bright spot of hope for this wonderful family of fish – the goodeids – and for freshwater fish conservation in general.

In preparation for the species’ return to the wild, the fish were first placed in ponds to adapt to different conditions and then taken to floating pods known as mesocosms in the river where they lived for at least a month to continue their development. to adapt to the natural environment. terms of release.

Fish released into the wild have been tagged and will be monitored over the next five years to assess whether the population is increasing and whether the fish are reproducing and growing successfully in the river.

Paul Bamford, regional program manager for Latin America at Chester Zoo, said: “This project is a great example of how zoos can contribute to conservation in the field through breeding and conservation research, leveraging the skills and experience gained in zoos. have been developed to help strengthen existing and emerging wild populations.

“By supporting the conservation of freshwater in Mexico and the ecosystems in which the fish live, we are protecting not only the biodiversity and well-being of freshwater environments, but also the people and communities that live alongside them.”

The project is part of Fish Ark Mexico, a conservation project in central Mexico that focuses on 41 highly endangered species of freshwater fish.

In 2014, scientists from Michoacan University of Mexico and fish farmers from the Goodeid Working Group helped restore degraded habitat and remove non-native species from the Teuchitlan ecosystem.

Good Morning Britain, Lorraine and This Morning have episodes on Christmas Day

Mother of London firefighter who killed herself welcomes damning report

The big mismatch: Remote jobs are in demand, but vacancies are drying up