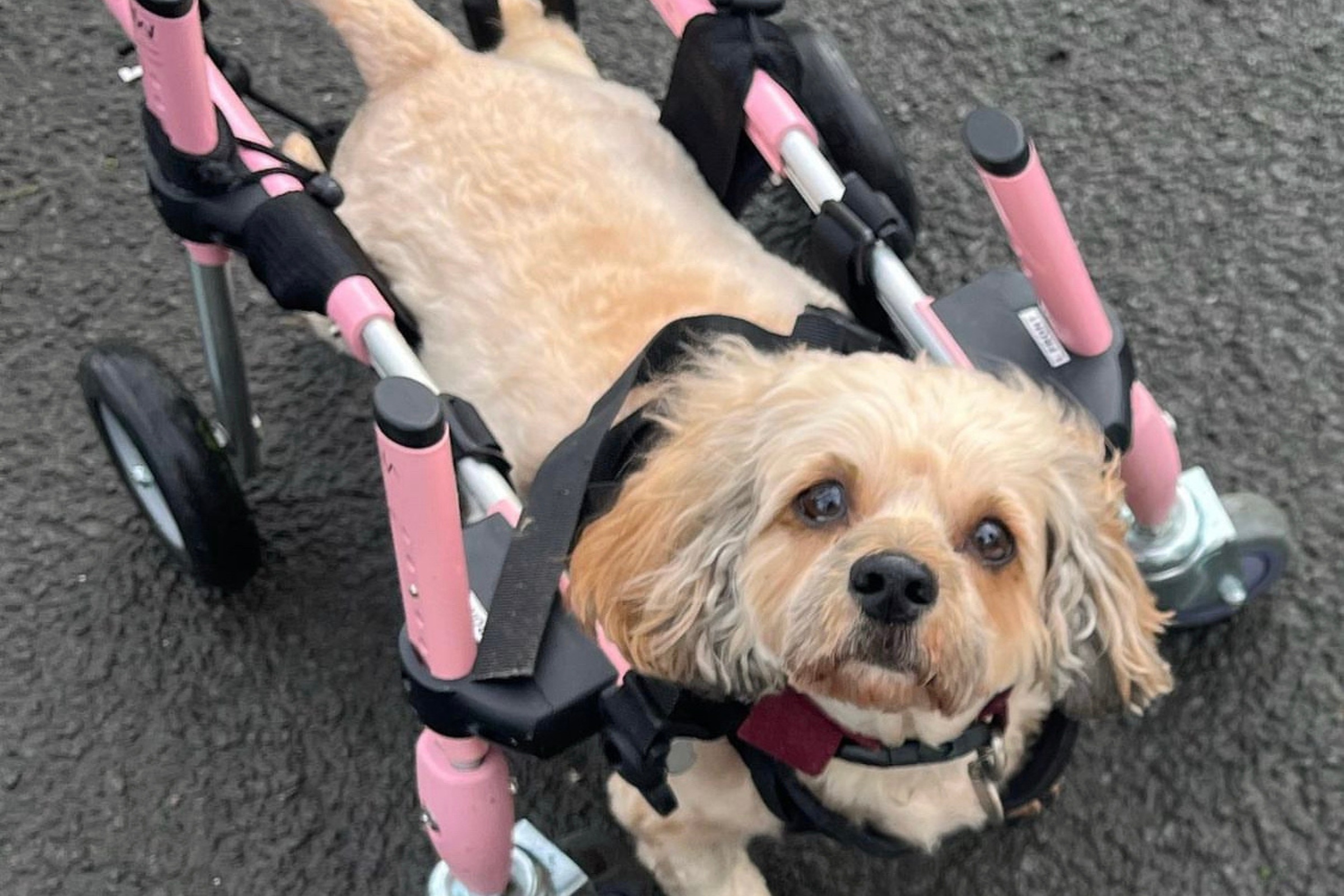 My partner and I got our first dog, Sid, in January 2017. We love dogs, so a few months later we welcomed a second, Maggie, into our home.

We got in touch with Maggie right away when we visited a breeder we found online. Some dogs were nervous and some were rambunctious, but there was Maggie strolling along. She was very confident, and small, of course. I fell in love with her the moment I saw her.

We brought her home in March 2017 when she was eight weeks old. She then weighed only 0.75 kilograms; she was very small. The first years of Maggie’s life went well. My daughter loved her; Maggie is a very caring dog.

Strange behavior from our dog

When she was a young dog, Maggie appeared to be fine and healthy. Then one day, in August 2021, Maggie lost strength in her back legs. I was at home, saw her shuffling around the house and felt something was not right.

I thought maybe her legs hurt because she had elbow dysplasia, a joint disease that causes a dog’s elbows to develop abnormally. But while she was eating I noticed her back was arched. She is a Shih Tzu mixed with a Dachshund so I knew her breed could cause back problems.

I immediately took Maggie to the vet. But at that moment she was walking normally again. The vet assumed that because Maggie was walking, she might have sprained her back.

So I was told Maggie’s back would recover after two weeks of rest. But when I got home from the appointment, Maggie’s legs started to buckle again. She then became completely paralyzed within half an hour. It was heartbreaking to watch.

I have a two-year-old daughter, but I also classify my dogs as my babies. I hate to see an animal in pain. So to see my own dog like this really upset me. I was furious; it was a very tough time.

An emergency trip from the vet with our dog

I took Maggie to an emergency vet that same day and was told she may have intervertebral disc disease, a condition of the spine that can cause paralysis in dogs. But after the doctor did an MRI scan, they found what looked like a blood clot in Maggie’s spinal cord – a cartilaginous embolus. I had never heard of this, but I was told it often causes strokes in dogs.

Maggie stayed at the vet that night. The next day I received the devastating news that there was no surgical procedure that could help Maggie recover. I was told the only possible way she could possibly walk again was through physical therapy and hydrotherapy. This consists of doing underwater exercises such as swimming to strengthen a dog’s muscles. The warm water from hydrotherapy also reduces muscle pain and helps joints to recover.

The doctor then explained that my partner and I had two weeks to check Maggie’s bowels and bladder, and if she couldn’t relieve herself within those two weeks without pumping her, they might have had to put her to sleep.

I was in the yard when I got the call and I started crying. I called my partner and told him Maggie might be put to sleep. He immediately hurried home. It was devastating and very emotional to hear because she was only 3 years old.

How we dealt with a sick dog

Your dog is a huge part of your family, you want them to live as long as possible. You never want to imagine a day when your dog is not there. I couldn’t fathom the thought of losing Maggie at such a young age.

When my partner got home I explained to him that I had already told the vet that I was not giving up on her and that I would do everything possible to give her a good chance before considering putting her to sleep.

I started looking for hydrotherapy services near me. I found a local place and called the owner about 20 times before finally deciding to drive there. I was determined to get Maggie in as soon as possible. The lady who worked there contacted me that very evening after I spoke to her in person and explained Maggie’s situation. The next day I picked up Maggie from the vet and started hydrotherapy with her that evening. The next day we also started physiotherapy with her.

Due to the two week time frame we had, my intention was to speed up Maggie’s recovery process. When Maggie got home, before her first hydrotherapy session, we were ready to try expressing her bladder ourselves. But to our surprise, she urinated herself that evening. I immediately called the vet. I was shocked. I assumed she had been scared at the vet so she couldn’t relieve herself.

I called the vet and she was amazed and so happy that Maggie relieved herself without us having to voice her. This meant we could focus on all of her therapies.
It was a huge relief from our shoulders as it was one less thing to worry about during her recovery journey.

My friend originally set up a fundraiser for Maggie and we raised $600, so in September 2021 we bought Maggie a wheelchair with the money. It was shocking to me because I never thought I would have a dog that is in a wheelchair. But at the same time, I felt a lot of relief that I had something that could potentially help Maggie walk again. My partner and I also bought her a pushchair and backpack to put her in.

The second miracle in our dog’s recovery

After about a year, I noticed that Maggie started walking in her wheelchair. I noticed she started using her back legs more in the wheelchair instead of dragging them. When I saw this I thought I was dreaming. It was then that I began to lose hope that Maggie would be able to walk again. So I got her out of the wheelchair and put a blanket under her and she walked on without a wheelchair. I then started practicing physical therapy postures with her, such as moving from a sitting to a standing position. She started walking again. It was very comforting to see.

Since Maggie’s illness we have continued physical therapy and hydrotherapy. My partner and I ourselves do physical therapy with Maggie two or three times a day. We also consistently massage her front legs and take her to hydrotherapy. But Maggie’s bladder isn’t like it used to be and her bowels are still weak. We place her on puppy pads in the car or at home in case of accidents.

When Maggie was in a stroller, people said they thought we were trying to be fashionable by putting Maggie in a stroller. Sometimes the comments hurt because I always thought, She’s partially paralyzed or I wouldn’t have her in a stroller. I’d rather she walk and run than sit in a stroller.

Although we still use Maggie’s stroller occasionally, she is walking more regularly again. The bright side of people’s comments is that I can bring attention to Maggie’s condition. I like to tell people about it because before Maggie’s incident I had never heard of a fibrocartilaginous embolism.

I used to worry constantly about Maggie’s quality of life, but not anymore. Seeing her start living normally makes me happy. This month she walked slowly to a tree and sniffed it. She can’t do that anymore since she’s in a wheelchair.

I’m excited that Maggie is going to take her first real walk with us again. We loved to walk and I think while she may never be able to walk properly again, she is walking and building strength. I’m excited to get back into our routine.

Megan Donoghue is an Online Bingo Chat Moderator and Personal Assistant to a Dog Trainer. She has been looking after her dog Maggie since March 2017. You can learn more about her here.

All opinions expressed in this article are those of the author.

What the newspapers say – November 26

Guess who Leonardo DiCaprio hung out with at Art Basel