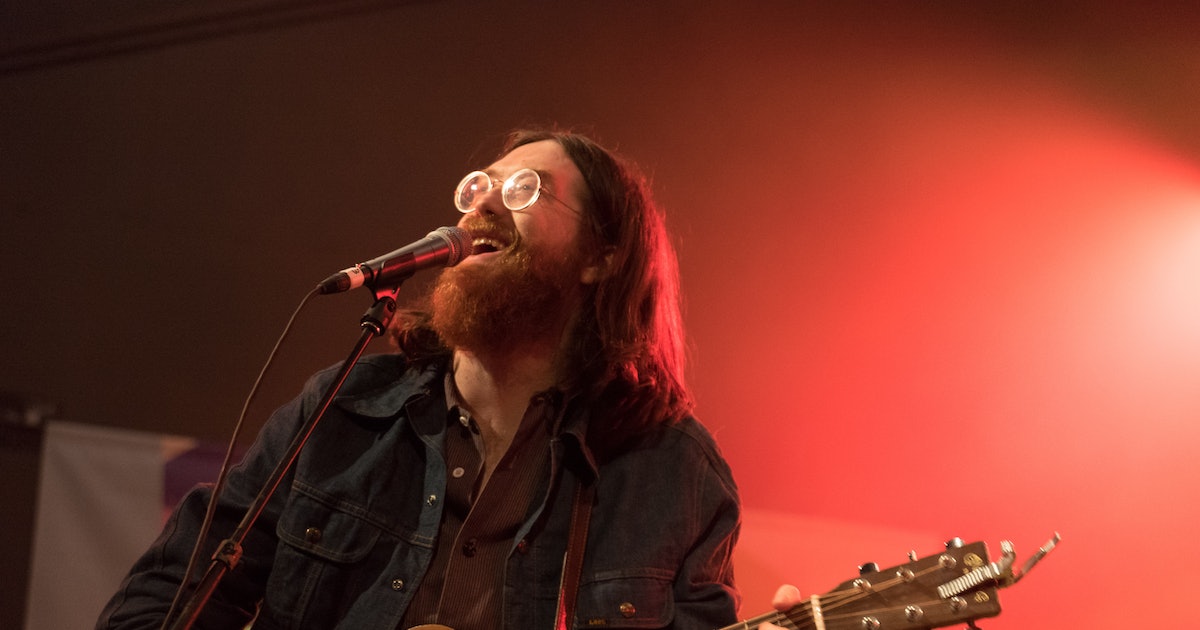 “I completely forgot you were going to call me,” Will Sheff said of what sounds like a highway rushing by at high speed. The 46-year-old singer is currently touring his new solo album Nothing special, and he conducts our interview from the passenger seat. “We’re in the early morning part of the ride where we throw stories back and forth about Frank Sinatra and Randy Newman and Devo and Mick Jagger,” he explained, switching to headphones. Suddenly he comes through loud and clear. “It’s the rock and roll anecdote of the bus ride,” Sheff said. “I’m in my rock ‘n’ roll anecdote.”

Rock and roll anecdotes — annotated, apocryphal, and somewhere in between — were a big part of the songwriting style Sheff perfected as co-founder and frontman of Austin-based indie band Okkervil River, a shifting musical collective whose mostly stellar discography dates back to 1998. Initially lo-fi and highbrow in the thoughtfully lean tradition of Elliott Smith of the Magnetic Fields, the group hardened and broadened their sound in their mid-2000s incarnation, featuring a raw guitar attack (most notably on the gory, gruesome breakthrough single “For real”) and the sparse, furious drumming of Travis Nelsen, who became Sheff’s closest and most cheerful collaborator. Buoyed by a pre-poptimist, Pitchfork-centered blogosphere whose scribes were equipped to follow (and gobble up) Sheff’s breadcrumb trails of musical and literary allusions, Okkervil River achieved an impressive level of critical and commercial success while always being a little too thorny. stayed and attentive for the Next Big Thing status.

And that’s exactly how Sheff, with his semi-forbidden hipster intellectual attitude, seemed to want it (the first time I saw him on stage in Toronto, he was wearing a Maya Deren t-shirt). A petite, bookish English major, Sheff was drawn to songs about fringe or iconoclastic artists such as Tim Hardin, the Oregonian folkie whose fatal heroin addiction partially inspired 2005’s tender, sizzling song cycle. Black sheep boy (a few years later, Sheff won a Grammy for producing and writing liner notes for a comeback record by the legendary eccentric Roky Erickson). On the distressing Black sheep boy lament “So Come Back I’m Waiting” the protagonist’s demons summon themselves in the early hours, promising help, vengeance and triumph if the artist in their bondage but submits and soars upwards, an invitation to oblivion: “Come back and we’ll take them all / come back to your life on the run / come back to your old black sheep man / I wait for hoof and hand … wait quietly to make you my lamb.

At his best, Sheff combined the reverence of a music historian with a healthy sense of subversion. A good example would be an intoxicating, melodic charmer “Plus Ones” from the 2007 showbiz theme the stage names, with its gleefully tweaked references to hit singles past and present, each gifted an extra, disfiguring integer (“the 51st way to leave your lover…I can’t listen honey, about the fourth time you were a lady” ). The song’s numerological conceit wasn’t just ingenious; it was a statement of intent, jesting as a form of homage. On someone else Phase names track, the daring DIY ode “Unless It’s Kicks,” Sheff self-deprecatingly referred to himself and his crew as a “mid-level band.” It was a line that not only handed ammunition to critics slowly growing weary of the singer’s intricate lyrical pirouettes, but also loaded and aimed the gun. “Should Sheff stop worrying about what a star he is, or isn’t, or doesn’t want to be,” snapped an unconvinced Robert Christgau in the following year The Village Voice Consumer Guide. “Normal obscurity is within its capabilities, I swear.”

Fifteen years later, after both the spiritual and official demise of Okkervil River (including a glittering, premature musical kiss wryly titled “Okkerville River RIP”,) there is a sense in which Sheff seems to have internalized and transcended such rebuking advice. Nothing special, which came out in October, is the first album he’s released under his own name as – to borrow the title from another caustic, cautionary Okkervil River tune – a classic ’70s-style ‘Singer Songwriter’. It also contains some of the most relaxing and beautiful music of his career. It consists of textured, slowly building ballads that ebb and flow without ever really rocking; the sonic palette is all pastel-technicolor keyboards. In Okkervil River’s heyday, Sheff sang every other song like he was spitting poison out of his lungs, but now his voice merges with the swirling soundscapes. “The punk rock, please kill me, I want my music to hurt people … I started seeing it as a very adolescent,” he said. “It was very masculine, and maybe also very white and suburban.” When I asked him if that means he could have been Fred Durst in another life, he laughed and was quick to add that he doesn’t deny the bleakness of Okkervil River’s back catalogue. “I’m proud of what I’ve expressed,” he said. “But I don’t want to walk around with it.”

Catharsis comes in many forms and there is an unmistakable sense of letting go Nothing special, with several songs inspired – or haunted – by Nelsen, who passed away in 2020 from unknown causes. “Smooth-sailing children, not a thought in their head,” begins the lilting, piano-driven memory “In the centre of,” staring from a reflective, melancholy distance at a pair of aspiring musicians in their twenties: rich in tactile detail (a hand broken by hitting a piano) and imbued with a thick air of mourning, it’s the closest thing to vintage Okkervil River, especially in the way it tickles and punctures certain romantic, destructive impulses. “Stories can become so powerful that they take over your life,” Sheff said. “Travis and I both had these rock ‘n’ roll myths that we had fallen for, and it was very hard for us to replace them.”

“We need a myth,” Sheff sang on 2011’s Clattering, Chaotic I’m very far – an album that was dominated by Nelsen’s percussion for a long time. The unspoken but urgent message of Nothing special is that myths, especially when they are most compelling, can be dangerous: the trick is to learn from them without completely surrendering yourself. “If you’re trying to be Dylan Do not look back, or the substitutions, or Little Richard, you can’t get around it. Health and common sense and not dying young are starting to seem boring. There is no vision to take care of yourself, that’s not just your boring dad,” he said. “As you get older, you have to find something else that’s still powerful — that’s creative, spiritually powerful. For some people, the vision of dying young is romantic; you are under the spell of a certain fantasy. But when you experience it, there is nothing romantic about those missed opportunities.”

The moderation Sheff speaks of is reflected in Nothing special title, with its sardonic tinge of mediocrity, or, as Christgau’s expression says, “normal darkness.” The self-mockery is real, but it also belies a benevolent, affirmative everyday metaphysics. “Those two words are very complicated,” Sheff said. “They are two words with opposite meanings placed side by side. On the cover of the album I put them in different colors; you can think of it as ‘nothing special’ or ‘nothing’ and ‘special’ side by side. People say if everything is special then nothing is, but I would say ‘maybe everything is special’. I am a big believer in not looking at things out of context.” With this in mind, the somewhat New Age feel of a track like the stately, shimmering ‘Holy Man’ is contextualized by a darker-toned predecessor like ‘So Come Back, I Am Waiting’. Both are ultimately about the ecstasy of surrendering to something greater. “I’m still interested in darkness,” Sheff said. “‘Holy Man’ is kind of tragic… it’s about a lost soul who finds fulfillment by turning over his will to someone else.”

When Nothing special came out last month, the one thing that stood out during Sheff’s press rounds was his observation that touring the record was likely to put him in the red rather than increase his revenue – a by-product of part of performing without the name Okkervil River, but also an illustration of its industry’s rapidly shrinking margins. It’s a depressing turn of events for an established — and, all jokes aside, upper-mid-level — indie star like Sheff to take an L while playing faithfully for die-hard fans, and I asked him if For these reasons or any other, he could envision himself confining himself to the studio in the future, eschewing the introverted charisma of his live shows and becoming his generation’s equivalent of Steely Dan.

“I was an uncoordinated and sickly child,” said Sheff, who suffered from epiglottis as a baby and almost died as a result (a brush with death immortalized in 2018’s beautiful “Famous Tracheotomies,” with its empathetic appeal from fellow surgical patients-slash- artists including Dylan Thomas and Ray Davies). “I have a weird relationship with being a body, and I think in a weird way it keeps me from being the artist I want to be. But I think I’m a good artist nonetheless,” he said. “What I always look for in performing is to lose myself for a while. It’s like taking your kids to the beach, and they run to a safe place, and you get to sit down without them… your mind is running somewhere.”

“When you perform,” he continued, “you can empty yourself and be in the moment, with the music flowing through you. It’s the hardest thing to do, but ten percent of the time I achieve it, and that’s why I do it, except because I have to promote the record. When the band is great and the audience is receptive, they are like one organism. Everyone forgets for a moment that they have a student debt or an operation or a fight with their mother or that they want everyone to like them. Everyone forgets themselves, and they belong. That’s what I’m looking for. I will never want that.”

Adam Nayman is an editor at Cinema Scope and author of books about Showgirls, the Coen brothers, Paul Thomas Anderson and David Fincher.

Focus on family destroyed after Club Q shooting: ‘Blood on your hands’